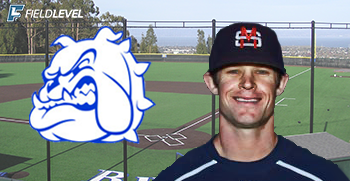 After high school, I played at College of San Mateo then transferred to San Diego State. My coaching career got started at Junipero Serra High School in San Mateo where I stayed for one season. After that season I was offered a job with College of San Mateo and just completed my 5th season with the Bulldogs.

I’ve been lucky enough to be around some amazing coaches as a player and as a coach. Doug Williams has been someone I have looked up to and learned so much from, both playing for him and now coaching with him. Being around someone who has had as much success as Coach Williams makes it very easy to want to learn on what it takes to become a great coach.

Overall, I believe that you need to create an environment where your players have the ability to grow and succeed not only as players but also as men. Building strong relationships with your players is so important to their individual success and the overall team’s success. Any level of college baseball takes talent to have a successful team but it also demands relentless energy and effort day in and day out. By building those strong relationships with your players, as a coach you are able to maximize what you get out of your players on a consistent basis.

College of San Mateo has a great winning tradition as well as moving players on to four year schools and even professional baseball. We have won our conference title 13 times in the last 23 years and have had over 60 players transfer to play Division 1 baseball in the last 10 years.

We have won our conference title 13 times in the last 23 years and have had over 60 players transfer to play Division 1 baseball in the last 10 years.

CSM has this track record of success because of how hard our players work continuously over the years and are intrinsically motivated to reach their highest potential as a player during their time at CSM.

What’s the most important thing student-athletes should focus on to help get successfully recruited by colleges?

First and foremost, student-athletes need to focus on their academics and making sure they do well in the classroom. On the baseball side of things, players need to continue to tirelessly put in the work that it takes to become a college athlete. It is not easy to get to that level and the one’s that put in the most time to better their skills fundamentally, physically and mentally are the players that set themselves up for future success.

Technology has made the recruiting process go so much faster in terms of the amount of exposure a player can get in a short period of time. As coaches, with all of the new recruiting technology and databases that are available, we are able to find more players faster than ever and from places that we may not have had great access to before.

College of San Mateo has used FieldLevel for almost seven years now and we find great value in the services that it provides. I would recommend FieldLevel to all players and coaches of all levels.